The emergence of Avant, Singapore was timely as there was a strong desire to expand and explore the theatre craft in South East Asia with many collaborative partnerships. Steadfast in its artistic direction and realising many opportunities for artistic exploration in this region it was a lucrative and commercially viable move to set up Avant Theatre & Language Limited in Singapore on 2nd March 2011 as a Public Company Limited by Guarantee under the Non-Profit Organisation entity.

Avant, Singapore is new, fresh and is willing to take on exciting ventures to promote multicultural art forms in Australia. Having the best of both worlds, east and west, Avant wants to be a hybrid production company carving its name in Melbourne’s contemporary theatre scene. Avant, Singapore aims to be a professional creative platform showcasing commercially appealing productions and an artistic exploratory platform working in partnership with local arts organisation in supporting the Singapore Global Arts hub identity. Avant, Singapore endeavours to promote the creation of hybrid performance environment that is commercial, educational and entertaining.

Avant Theatre has successfully completed its 1st International Production Tour with ‘Bhishma the Grandsire & Bhishma the Pitamaha’ to India and Sri Lanka in October 2011. We were received by warm fellow men and arts appreciative people in both countries. The production received raving reviews mainly highlighting Tamil Theatre in Singapore and appreciated the clarity, profound use of Tamil Language. Actor Mr Puravalan as Bhishma was highly talked about by the high arts circle of Tamil Nadu and Jaffna. Deeply appreciate Manu Arts India and all promoters in Sri Lanka mainly Dynamik Event Management in Colombo and Mr Akilan of Jaffna together with all media, Press and TV station for the support and Publicity. Not forgetting Vasantham’s Talam and TAMIL MURASU for their continuous Support. NAC and SIF for making this travel journey possible. Scroll down to see all Newspaper article and photographs with Invited guests that includes, SUPER STAR Rajini Kanth & Director K Balachandar, Director Charan, Music Director M S Viswanathan & Bharadwaj, Actors Nasaar, Parthieban, Pandiarajan, Pasubathy, Rajesh, Anandhakannan, Dance Doyen The Dhanajayans, Sutharani Ragupathy High Commissioner of Sri Lanka, Minister Douglas Devananthan of Sri Lanka, Mayor Pathmavathi of Jaffna and other important Dignitaries. Avant is humbled by the success of this venture.

Avant is proud to celebrate its 10th Anniversary in Singapore with two unique ground breaking production. Bhishma the Grandsire & Bhishma the Pitamaha was a duologue in English & Tamil by the same artiste within an interval of 15 minutes in September 2011 and also another first ever in Singapore a Total Theatre Concept presented with the text from William Shakespeare’s Romeo & Juliet which was transcreated in Tamil as Romz & Julz, with audience having the choice to view the process and/or the narrative of a performance for holistic appreciation of theatre. This productions together with the touring production concluded Avant’s 10th Anniversary celebration.

Avant, Australia is a non-profit organization registered with the Victorian Consumer and Business Affairs has been set up in Melbourne, Australia (B1587748C) in 2001 to serve as a platform to fuse, promote and instil various art forms so that art can grow, thrive and move forward in this world of constant change and advancement.

Avant Australia debut theatre production was in November 2001 when we did a bilingual collaboration with ethnic artistes from Singapore which served as a launching board for us to showcase both local and international pool of talented artistes in an independent production.

Next Avant invited International artists from Sri Lanka, Malaysia, Singapore and India to create a successful blend for our production Two Spicy Masala* (*a powdery mix of herbs and spices) which added flavour and taste to the Melbourne Fringe Festival 2002.

Four days of overwhelming support and encouragements from 2002 festival has given us the inspiration to work once again on another venture. For Melbourne Fringe Festival 2003, we are happy to partner with another Melbourne based devise theatre company, The Laughing Ostriches to present yet another enrapturing double-bill. A variety of young and budding talents tackled a wide spectrum of issues that teased, enticed and challenged the audience thinking. Asian art forms such as Bhutto from Japan, Wayang Kulit from Indonesia and Bharathanatyam from India and modern body art were explored in a movement piece where women share their inner deep dark secrets that shocked many.

As part of 2005 Melbourne Midsumma Festival, we staged PRICE. PRICE is a captivating and sexily hilarious Indian Drag Performer’s story that threw light on controversial issues affecting minorities within a minority group. Issues such as how the gay community is looked upon by the Asian community in this time and age were explored in greater detail.

In September 2008 Polygamy was staged as an independent project. Polygamy explored patriarchy, religion and identity of the marginalised.

Also Avant as part of its community and cultural initiative, partners with CERES (Centre for Education and Research in Environmental Strategies) a community environmental park to cultivate the idea of multiculturalism and cultural cohort among school children. Avant advocates the nuances behind cultural practices and the understanding and appreciation of arts of Asia to understand and appreciate the other members of the community.

Avant partners with its associate theatre company in Singapore, Ravindran Drama Group, Singapore in various initiatives during 2007 to 2008 activities where company redesigned its artistic vision and goals for its theatre development. This collaborative partnership enables growth and exploration of ideas and talents across different arts organisation. 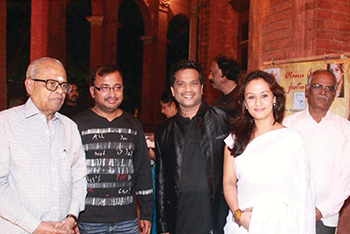